AERF is determined to proliferate the cause of forest conservation to the world and bring the Northern Western Ghats on the global conservation map using the tool of effective communication along all laterals. The following are the recent few instances where we have strived to push forward the cause across various visual, written and interpersonal communication channels

- AERF goes live on Radio One


Dr. Archana Godbole was invited to speak about AERF at 94.3 FM Radio One, Pune. She spoke about AERF’s mission to demonstrate conservation on the ground through community participation and applied research.

- Talking to students and nature enthusiasts


Dr. Archana Godbole was invited to deliver a lecture on sacred groves on 17th November 2015 in Thane by Foundation for Educational Rendezvous with Nature (FERN) especially organised for students and nature enthusiasts.


AGROWON a leading Marathi newspaper has covered AERF’s work on FairWild certification to Hirda & Beheda fruits in their Sunday edition on 19th July 2015. This was another opportunity to convey conservation action by AERF demonstrating the benefits of conservation to large numbers of AgroOne readership from rural Maharashtra.


AERF’s exceptional achievements in the field of green entrepreneurship and incentive based conservation were covered through two documentary films by IORAPro- a professional company based in Bangalore. The entire film productions supported by Critical Ecosystems Partnership Firm (CEPF). The main objective behind the films was to highlight the outstanding projects supported by CEPF in the Western Ghats over last 6 years.

- Film with Cambridge for heritage trees and seeds


AERF produced another film for a project - Conflicted Seeds - which was initiated and supported by Cambridge Conservation Initiative based in Cambridge, UK. The main focus of the project and the film was conservation of giant trees across the world. The film covered giant tree and the associated biodiversity of Terminalia bellirica. As part of the project, saplings of Terminalia bellirica were raised in Cambridge Botanical Gardens in UK. 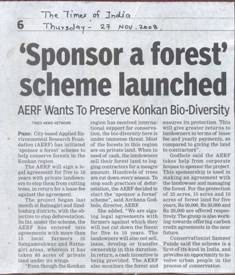 The Times of India publishes news on the launching of Sponsor a forest scheme, dated: 27 Nov 2008 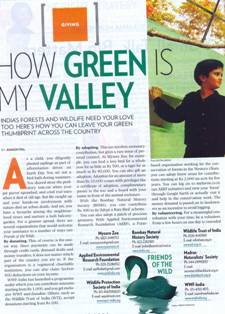 Article “How green is my valley” provides AERF’s opinion on what measures everyone and anyone can take to protect the environment. 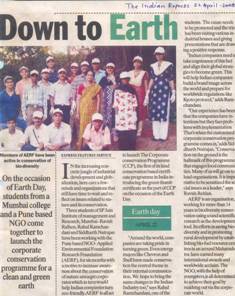 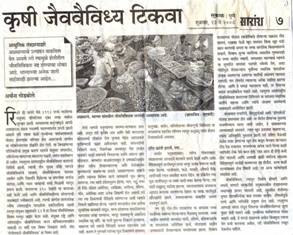 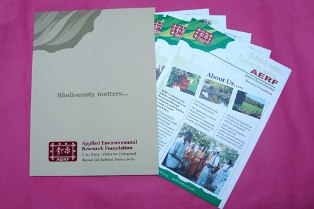 AERF is making a sustained and dedicated effort to reach out to corporate organizations that have a bigger share of responsibilities to protect the environment. AERF has excellent materials designed for corporate stakeholders to make them aware of the needs and values of conservation and encourage them to step forward and be the stewards of environment protection.